Religion is for the weak 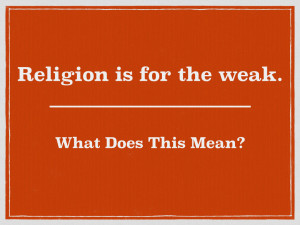 Perhaps you believe that religion is the root of all evil. Maybe you even think that we need less religion and just Jesus… or nothing at all! But think about this, to dismiss religion isn’t simply to forgo fairy tales but to forfeit all that humanity has done in the name of religion. For Christians this includes a preeminence in healthcare and education, renown scientists and philosophers, humanitarian aid and ongoing care in the world.  I agree, in the name of religion many evils have been done, even within Christianity. But haven’t agnostic and atheists done atrocious and grievous deeds too? Where is the call of the culture to cast them aside? Crickets! The silence of humanity for the evils of the so called “non-religious” and the uproar over the evils of the “religious” is both laughable and sooo not funny.

What’s the solution? Jesus, who existed in history, calls himself God and proves his point by dying and rising from the dead. I’d say that the historical evidences from eyewitnesses, secular and friends, to the Christian religion make a good case. But that’s a topic for another post. This Jesus who dies and rises for your salvation came not for those who think themselves strong, powerful, or rich. Jesus comes for all people lost in their sins–that includes the poor and the rich–it’s everybody! Someone once said of Jesus, “Behold, the Lamb of God, who takes away the sin of the world (John 1:29)!” It’s true, Jesus comes to save us from our greatest weakness…ourselves, our sinful selves. Religion is for the weak, and Jesus is YOUR true strength and refuge. His sacrificial love saves. No other religion can truly claim that, neither can anyone claim this, none but the one Lord and Man, Jesus Christ.