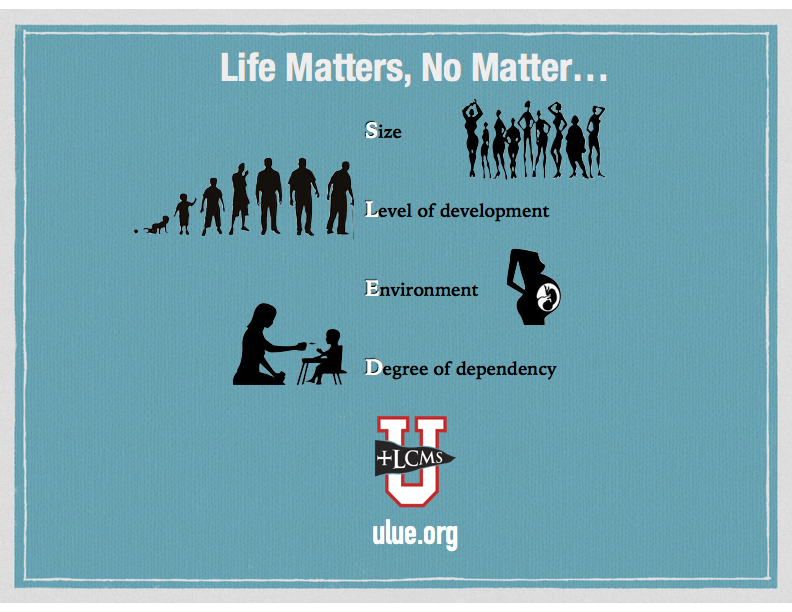 The thief comes only to steal and kill and destroy.

The thief is Satan and his weapon of choice is temptation. In the Lord’s Prayer we ask God to “lead us not into temptation, but deliver us from evil.” Evil is all around us in thought, manifest in sins of word and deed. Jesus came to destroy the power of sin, death, and deliver us instead into eternal life through faith. Faith is our shield from Satan and our sword for battle is the Spirit, the Word of God (cf. Eph. 6). Still, while Christ remains the victor forever, Satan remains at the helm of temptation, seeking to destroy life redeemed in Christ. He wants children to remain unborn, the born in sin to remain without Baptism, or better yet, murdered by abortion. He hates babies because Jesus became flesh, was begotten and incarnated into Mary’s womb. Jesus was a babe, permitted to be born, and ultimately escaped Satan’s every effort to murder him.

Every January hundred of thousands make a pilgrimage to Washington D.C. to voice their support for life in The March for Life—an event as old as the Roe v. Wade decision (1973), which legalized abortion on demand. For over 40 years the King of Thieves has stolen away our children through temptation’s smokescreen of legality and choice ideology. He has told women that their choice is good and their only option is abortion. His whispers both convince women and confirm them in one way, to freedom and in another way putting ease to their fears. What really happens is that abortion does not give freedom or leave fears behind, it marks a woman for life. Some embrace the mark, and call it good. But a life taken is always a life marked with darkness. Christians cannot forget this. Christians ought to be prepared to know that whether a woman understands her mark or not, they are called to be the voice of light. We cannot forget the death of the unborn child. We cannot forget the woman marked with this darkness. We cannot forget that women who embrace the darkness need the Law and the Love of Christ. We cannot forget the women who have lost their motherhood, or the men who have lost their fatherhood. No matter the situation, by choice or by corrosion, Christ loves the lost. Because they matter to Him—the unborn to the elderly, the healthy and ill. He died for the lost, the broken, the shame-ridden, the happy, and sad. And, He died for you! Christians are called to pray and voice the truth of the Gospel, that Jesus came to establish a life of faith and an abundant life eternal! Christians have God’s Word, science, and philosophical truths that together coincide in making the case for life.

To supplement your conversation with anyone, Christian or not, provided here is an acronym called S.L.E.D. This tool serves to establish the personhood of the unborn—use it in love:

If value is measured by level of development, embryos and fetuses become, to some, less than human. The logical extreme of this view uncovers the absurdity that a four-year-old child is a lesser human when compared to a more developed fourteen-year-old.

If value is measured by environment, how does a journey of eight inches down the birth canal suddenly change the unborn nonhuman to the born human? Where you are does not establish who you are intrinsically!

If value is measured by degree of dependency, at what point is someone truly independent? The subjective nature of dependency reaches beyond a child in the womb, from needing insulin medicine or an inhaler to the very basic needs of food and water. Each comes from outside of an individual, making all people dependents to some degree.

Everyone is equal in their personhood because they share a common human nature. Humans are valuable themselves, not for anything else they can be or do. Individuals have intrinsic value. And this innate worth, comes from the hand of God who created you!